Like most students, mine enjoy creating and playing card games. The process of creating a game is itself an activity that involves critical and creative thinking skills in addition to language practice, and a project that works especially well when working with very small classes (or when teaching one-to-one). 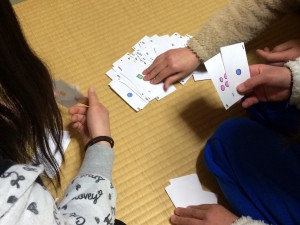 One of their most recent creations, High Speed Match, is a good example. To begin, I found pictures of a similar card game, Blink. It’s different from most matching games in that players are allowed to match color, shape, or number, and everyone plays at the same time (rather than taking turns). I gave students a task: Create a similar game that would be fun enough for them (my most advanced students) but that even the kindergarten students could enjoy.

Students first looked at the kindergartners’ book (Let’s Begin) to see what shapes, numbers, and colors they knew.

They initially planned to include the following shapes, colors, and numbers in their game:

They did the math to see how many cards they’d have to create, and realized that 10 cards for every shape and color combination was more than they wanted to make, and would be too many for a card game. They looked at some of our other card games to see how many cards were in a deck, and how they were grouped (suits, families, etc.). Their revised plan included five colors and shapes, with five number variations for each.

To create the cards, students made one master set of 10 cards for each of the five shapes, and then I made five copies of each set (one for each color family). After coloring, students cut and pasted to create the set of playing cards.

They played the game following the basic Blink rules and then revised those to make the game better language practice. The main change they made was to require players to announce what they were matching as they put down each card. For example, if Student One plays a card with three orange circles, another student can play any card that has three of any shape, or any orange card, or any card with circles. This video shows the game creators demonstrating the final product.

1. Place 2-3 cards face down in the middle of the table (2 cards for 2 students, 3 cards if there are more than 2 students playing). Deal all the remaining cards so that each student has an equal draw pile. These should also be face down.

2. Students take the top three cards from their draw pile. The cards in the middle of the table are turned face up, and play begins.

4. While all students play at the same time, they can only play one card at a time. As they play cards, they are allowed to replenish their hand by taking more from their draw piles. Students may not have more than three cards in their hand at any one time.

5. If no one can play, students can add a new card from their draw piles to the center cards. Alternately, they can trade one card in their hand for one in their draw pile. With so many ways to match, this rarely happens, and students successfully tried both ways of getting the game started again.

5. The first student to get rid of all the cards in his or her draw pile is the winner.

I’ve used this game with all of my classes, and it has been a unanimous hit. Interestingly, in mixed groups, the younger students seem to have a slight edge — they are more focused on shapes and colors than the older students are. It’s nice to have a game where they can win without any special accommodation 🙂

I hope your students like High Speed Match as much as my students do. If you also have your students create games, I hope you’ll share some of your own ideas in comments, or in another post!